You are here: Home / News / And the photo competition winner is…

Congratulations to Kirsty Summers, who submitted the winning photo of a moss rose entitled “Lean on Me”. The judges also awarded a highly commended place to Alex Davey for her snapshot of her children who are sibling carers, helping their parents look after their brother who has complex needs. Tesco Extra Musselburgh kindly donated a goody bag and vouchers as prizes (you are our community champions!)

Thank you to our judging panel who had the unenviable task of selecting only one winner:

Thank you also to all the competition entrants who shared their images and experiences with us – we were deeply touched by your stories and your generosity in sharing them.

And finally thank, you to all unpaid carers for the work you do every day, which is essential but so often invisible to the society in which we all live. 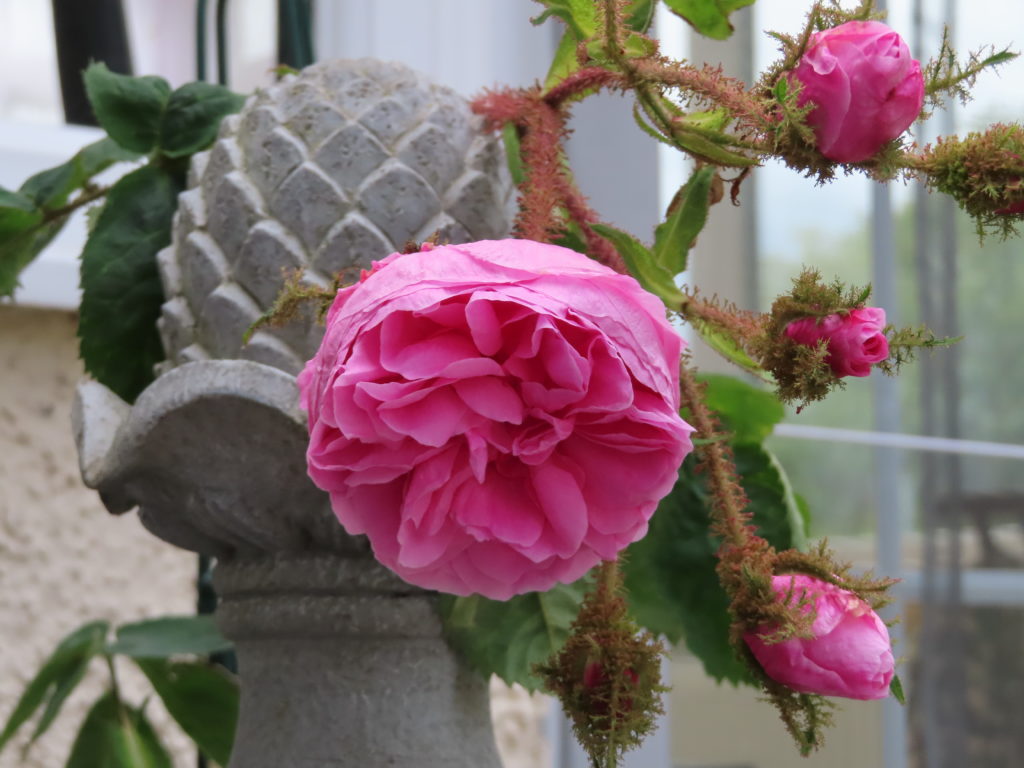 [WINNER] This is a photograph of a moss rose that, if it could talk, could tell stories going back about sixty years, possibly even more. It’s called a moss rose as it doesn’t have thorns like a modern rose bush. It also looks like the stems are covered in moss. I remember when I was little that this rose bush used to grow in my Gran’s garden, that would be around 1963. When she died my Dad dug it up and planted it in his garden. Since then it has ‘moved house’ another four times! My mother moved in with me permanently when she could no longer look after herself. That was four years ago and the rose moved with her. Although very fragile, I have managed to keep it alive in a pot and it has produced a few flowers each year. Mum and I would look out of the window together to see how it was growing. I was so pleased in the Spring when new shoots appeared. Again Mum and I would talk about it but this year she rarely saw it as her health deteriorated further. At the end of May she moved into a Care Home. This year the rose bush has thirteen flower buds on it. I’ve named the photograph ‘Lean On Me’ for several reasons: Because the stems of the rose are so brittle I have let the stems lean over a water feature for support. As we age we will probably need to lean on someone else for support. And, as a former Carer I was fortunate enough to be able to lean on CoEL for support and advice. At last I am able to visit my Mum, all be it at a distance, and we’ll certainly be talking about and looking at my photographs of the moss rose that could tell a tale or too! 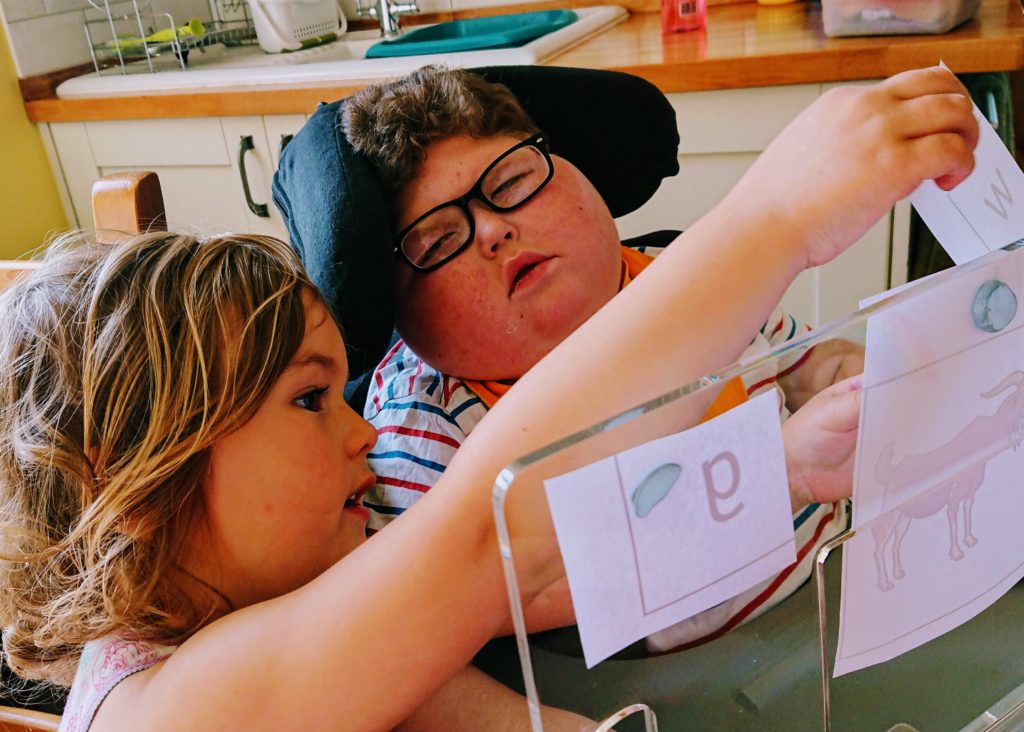 [Highly Commended] There were so many images I could have chosen! I wish I could send more than one. I finally settled on this one, because I think it sums up the hidden role of sibling carers, particularly during the covid lockdown when parents may be home-working as well as home-schooling and siblings have unquestioningly stepped into the breach. It shows my four-year-old daughter Caitlin, helping her six-year-old brother Benjamin (who has complex needs) with his schoolwork. I could also have shown Caitlin pushing Benjamin in his buggy, or big sister Jackie lying next to him while he slept, or both girls greeting him with joy when he came home from a long hospital stay. They are amazing carers and they don’t even realise it!

Lifeline for carers. The support groups are a chance to share information and talk about problems.
Professional, caring, this team does an excellent job. Thank you.
When I contacted COEL the help I received was exceptional and the carers courses were so informative and made my...
An excellent service which has been invaluable. I have no hesitation in recommending CoEL's services to others if I think...
The workers with COEL give the best support and advice truthfully and accurately. No falseness at all. Absolutely the best...
CoEL helped and guided us through our challenges enabling us to see much clearer what we were doing and what...
Quick and helpful response with no fuss. Excellent service
I first contacted COEL some 4 years ago when my husband was first diagnosed with Alzheimers and got excellent advice...
Sensitive, awareness and attention to detail all impeccable. I could not have managed without it.
I now understand better what I need and need to do, with help at hand if needed.
I found CoEL staff very helpful and reassuring when I felt stressed at the form filling to claim benefits and...
I feel very well supported and have been impressed with the service.
Feel totally at ease when we use CoEL. Their knowledge is excellent.
I can't praise your organisation enough for all the help you provided in the past.
Staff member went out of their way to assist me in obtaining the service I required. Member was very understanding...
Having someone to listen to problems and give encouragement and make helpful suggestions (also help with filling in forms) has...
Very supportive, kind, nothing was any trouble, went out of way to help. Nothing but praise for all help given.
I benefitted from a home visit, and I feel now I'm not alone.
It was at a time we were not sure what to do regarding care options for my mother. CoEL were...
Friendly helpful and put you at ease.
The staff in the office were very helpful and supportive when I dropped in without warning a couple of weeks...
Just to know you are not on your own and there is someone else you can rely upon when times...

The Carers Centre is open from 10am to 4pm Monday to Friday.
Appointments are advisable but not always necessary.

Carers of East Lothian is a charity registered in Scotland Charity Number SC027000 and a Company Limited by Guarantee No. SC366908

Sign up to our email list to keep up to date with Carers of East Lothian activities and events, other support services, and health and social care news that matters to you.

Please note our website uses cookies to enhance your browsing experience. If you continue to use this site, you consent to our use of cookies. To find out more about how we collect and use your personal date please read our Privacy Notice.

This website uses cookies so that we can provide you with the best user experience possible. Cookie information is stored in your browser and performs functions such as recognising you when you return to our website and helping our team to understand which sections of the website you find most interesting and useful.

Strictly Necessary Cookie should be enabled at all times so that we can save your preferences for cookie settings.

If you disable this cookie, we will not be able to save your preferences. This means that every time you visit this website you will need to enable or disable cookies again.